An Esteemed and Exceptional Friend 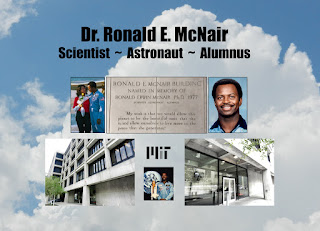 ORGANIZATIONS: Member of the American Association for the Advancement of Science, the American Optical Society, the American Physical Society (APS), the APS Committee on Minorities in Physics, the North Carolina School of Science and Mathematics Board of Trustees, the MIT Corporation Visiting Committee, Omega Psi Phi, and a visiting lecturer in Physics at Texas Southern University.

EXPERIENCE: While at Massachusetts Institute of Technology, Dr. McNair performed some of the earliest development of chemical HF/DF and high-pressure CO lasers. His later experiments and theoretical analysis on the interaction of intense CO2 laser radiation with molecular gases provided new understandings and applications for highly excited polyatomic molecules.

In 1975, he studied laser physics with many authorities in the field at Ecole Dete Theorique de Physique, Les Houches, France. He published several papers in the areas of lasers and molecular spectroscopy and gave many presentations in the United States and abroad.

Following graduation from MIT in 1976, he became a staff physicist with Hughes Research Laboratories in Malibu, California. His assignments included the development of lasers for isotope separation and photochemistry utilizing non-linear interactions in low-temperature liquids and optical pumping techniques. He also conducted research on electro-optic laser modulation for satellite-to-satellite space communications, the construction of ultra-fast infrared detectors, ultraviolet atmospheric remote sensing, and the scientific foundations of the martial arts.

NASA EXPERIENCE: Selected as an astronaut candidate by NASA in January 1978, he completed a 1-year training and evaluation period in August 1979, qualifying him for assignment as a mission specialist astronaut on Space Shuttle flight crews.

He first flew as a mission specialist on STS 41-B which launched from Kennedy Space Center, Florida, on February 3, 1984. The crew included spacecraft commander, Mr. Vance Brand, the pilot, Commander Robert L. Gibson, and fellow mission specialists, Captain Bruce McCandless II, and Lt. Col. Robert L. Stewart. The flight accomplished the proper shuttle deployment of two Hughes 376 communications satellites, as well as the flight testing of rendezvous sensors and computer programs. This mission marked the first flight of the Manned Maneuvering Unit and the first use of the Canadian arm (operated by McNair) to position EVA crewman around Challengers payload bay. Included were the German SPAS-01 Satellite, acoustic levitation and chemical separation experiments, the Cinema 360 motion picture filming, five Getaway Specials, and numerous mid-deck experiments -- all of which Dr. McNair assumed primary responsibility. Challenger culminated in the first landing on the runway at Kennedy Space Center on February 11, 1984. With the completion of this flight, he logged a total of 191 hours in space.

Posted by MIT Black History at 2:55 AM No comments:

A Profound Legacy of Excellence 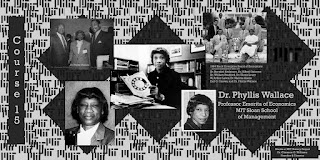 Dr. Phyllis A. Wallace earned the faculty status of professor emerita of management within the Sloan School of Management. She is a labor economist who pioneered the study of sexual and racial discrimination in the workplace. Professor Wallace spearheaded, through her scholarship, a precedent-setting legal decision in a federal case that reversed sex and race discrimination in American industry. She directed studies for a federal lawsuit against American Telephone and Telegraph Co., then the largest private employer in the United States. The suit led to a 1973 decision that the company had discriminated against women and minority men. The company agreed to pay millions in back wages and to make other pay adjustments. The verdict also brought about changes in transfer and promotion policies and recruitment criteria.

The case, which Professor Wallace wrote about in her book, Equal Employment Opportunity and the AT&T Case (MIT Press, 1976), was an extension of her own life, background and interests. She continued to work in these areas after her retirement and only recently had agreed to spend the next six months helping Sloan School Dean Lester C. Thurow improve the school's response to sexual harassment problems. She also had begun work on encouraging minorities in the participation of activities at the Boston Museum of Fine Arts.

In a letter to the Sloan faculty on her passing in January 1993, Dean Thurow said that, as a labor economist, Professor Wallace "widened all our knowledge." Her study of Sloan School women graduates "made everyone wiser about the issues of women attempting to advance in the business world," he said. Professor Wallace was born in Baltimore, MD. She received a BA degree in 1943 from New York University, an MA from Yale in 1944 and her PhD from Yale in 1948.

After receiving her PhD, she joined the National Bureau of Economic Research as an economist/statistician, while also teaching part-time at the College of the City of New York.
She served on the faculty of Atlanta University from 1953 to 1957, when she became a senior economist for the US government specializing in Soviet economic studies. She was chief of technical studies at the Equal Employment Opportunity Commission's Office of Research from 1966 to 1969 and vice president of research for the Metropolitan Applied Research Center from 1969 to 1972. After serving as a visiting professor at the Sloan School, in 1975 she became the first woman to hold the rank of professor at the school. When Mount Holyoke College conferred an honorary Doctor of Laws degree on Professor Wallace in 1983, the citation said that as an educator, public servant and scholar "your career has taken you from the university to government to the corporate boardroom." It continued: "Beginning your career at a time when neither blacks nor women had a fair chance, you have seen great progress toward equal employment opportunity-progress due in no small measure to your scholarship on the economics of discrimination in the labor market."

When she retired in 1986, scholars in industrial and labor relations and economics from around the world gathered at MIT for a conference in her honor. In addition, the Sloan School endowed the Phyllis A. Wallace Doctoral Fellows Fund, which provides support for blacks admitted to the school's doctoral program, and the Phyllis A. Wallace Visiting Scholars Fund to provide support for black visiting scholars at the school.

In addition to her many awards and honors, she served on numerous national advisory committees and corporate boards. Her books included Women, Minorities and Employment Discrimination (1977), Pathways to Work: Employment Among Black Teenage Females (1974), and Black Women in the Labor Force (1980).

Posted by MIT Black History at 1:41 AM No comments: