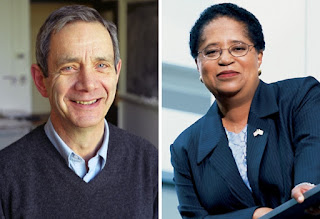 Excerpt as reported by the MIT News Office

MIT Professor Emeritus Michael Artin and MIT Corporation Life Member Shirley Ann Jackson ’68 PhD ’73 are among 17 world-class researchers in the country who have been awarded the nation’s highest honors for scientists and innovators, the White House announced December 22, 2015.

“Science and technology are fundamental to solving some of our nation’s biggest challenges,” Obama said in an announcement yesterday. “The knowledge produced by these Americans today will carry our country’s legacy of innovation forward and continue to help countless others around the world. Their work is a testament to American ingenuity.”

Posted by MIT Black History at 5:48 AM No comments: