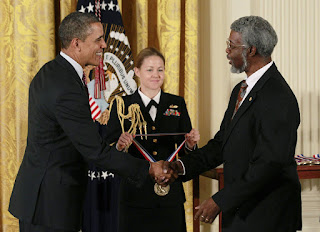 A Distinguished University Professor, University System of Maryland Regents Professor and John S. Toll Professor of Physics at the University of Maryland. Also an affiliate mathematics professor, Gates is known for his pioneering work in supersymmetry and supergravity, areas closely related to string theory. Gates earned two Bachelor of Science degrees in physics and mathematics and his Ph.D. in physics from the Massachusetts Institute of Technology. In 1984, Gates co-authored Superspace, or One Thousand and One Lessons in Supersymmetry, the first comprehensive book on supersymmetry, and joined the faculty at Maryland as an associate professor. Four years later, he became the first African American to hold an endowed chair in physics at a major U.S. research university.

The author of more than 200 research papers and a member of the National Academy of Sciences, Gates has been featured in dozens of video documentaries, including five in 2015. For his contribution to science and research, he received the National Medal of Science from President Obama in 2013. Gates serves on the U.S. President’s Council of Advisors on Science and Technology, the National Commission on Forensic Science, and the Maryland State Board of Education. He is a strong advocate for science, technology, engineering and mathematics education.

Dr. Gates contributed to an Amicus Brief respectfully submitted to the Supreme Court of the United States of America on October 15, 2015.

Amici respectfully submit that, for all of the foregoing reasons, this Court should affirm the Fifth Circuit’s judgment that the University of Texas’ holistic admissions policy satisfies the Court’s strict scrutiny requirements.

In the Amicus Brief's primary section outlining support for diversity in private universities:

PRIVATE UNIVERSITIES LIKE AMICI HAVE A COMPELLING INTEREST IN ACHIEVING ADIVERSE STUDENT BODY BY EMPLOYING A HOLISTIC, INDIVIDUALIZED ADMISSIONS PROCESS, WHICH IMPROVES THE EDUCATIONAL EXPERIENCE FOR ALL STUDENTS

Dr. Gates is quoted in Section D, page 21, footnote 27 within the section entitled:

Private Universities Have A Compelling Interest In Diversity Throughout Their Academic Programs, Including Science And Technology Fields In Which Certain Minority Groups Are Particularly Underrepresented

The benefits of diversity extend to all disciplines, including the hard sciences and engineering. As a leading physicist noted, “[a]lthough there may be one answer to a physics, chemistry or mathematics problem (based on the current state of knowledge), there are often multiple paths for arriving at that answer. In a broadly diverse classroom, all students thus benefit from hearing the different questions posed in the educational arena.”
___________________________________

It is remarkable that Dr. Gates body of lifetime achievements and research work represents the best of what science can achieve, also in social spheres that positively contributes to the administering of the education process within all of our institutions of higher education.  We commend Dr. Gates for his lifetime commitment to science, engineering, and technology.

Prior to the landmark judicial decision, Dr. Gates had written an editorial for the magazine, Science, which was published on March 25, 2016. 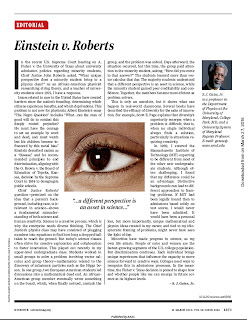 Posted by MIT Black History at 3:22 AM