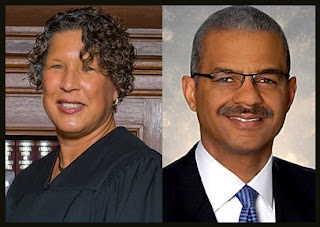 Judge Leslye M. Fraser was appointed an Environmental Appeals Judge in 2012. Prior to her appointment, Judge Fraser served as the Associate General Counsel for Pesticides and Toxic Substances in EPA’s Office of General Counsel (OGC). She first joined EPA OGC in 1995 as an attorney-advisor in the Air and Radiation Law Office before becoming the first Assistant General Counsel for Regulatory Issues in the Cross-Cutting Issues Law Office from 1997-2001. In 2001, Judge Fraser joined the U.S. Food and Drug Administration (FDA) as the Associate Director for Regulations in the Center for Food Safety and Applied Nutrition (CFSAN), a position within the Senior Executive Service (SES). In this role, in the wake of 9/11 she successfully led an interagency team from FDA and the Department of Homeland Security in developing in an expedited timeframe nine high-profile regulations affecting more than 440,000 domestic and foreign entities to implement the food safety and security provisions of the Bioterrorism Act of 2002 (Public Law 107-188). Judge Fraser was promoted in 2004 to Director of CFSAN’s Office of Regulations, Policy, and Social Sciences, where she led a multi-disciplinary staff of attorneys, social scientists, and administrative professionals in the development of food and cosmetic regulations. She served in this position until she rejoined EPA in 2010.

Judge Fraser received her bachelor and master of science degrees in chemical engineering from the Massachusetts Institute of Technology (MIT), and a Juris Doctor degree, Order of the Coif, from the University of California at Los Angeles School of Law. Prior to joining EPA, Judge Fraser was a research engineer and manager at TRW Space and Technology Group for nine years, then practiced environmental and labor law at a leading international law firm, Gibson Dunn. She has received numerous awards, including a U.S. patent for a material she co-invented for spacecraft hydraulic systems; the 2006 Meritorious Presidential Rank Award, which the President awards each year to a small group of federal career senior executives who “consistently demonstrate strength, integrity, industry, and a relentless commitment to excellence in public service;” several EPA Gold Medal Awards; the EPA Vivian Malone Jones Legacy Award; the 2004 Department of Health and Human Services Secretary’s Award for Distinguished Service; five FDA Commissioner Special Citation Awards (2003-2004); and the 2011 African-American Federal Executives Association’s (AAFEA) Distinguished SES Award.


As shared from EPA

Fraser earned a bachelor’s degree in chemical engineering from the Massachusetts Institute of Technology (MIT) and a master’s degree in business administration from the University of California, Los Angeles. He was also a Brookings Congressional Fellow (1995). Fraser is the past chair of the Communications Council of the Aerospace Industries Association and past chair of the finance committee of ServiceSource, Inc., a nonprofit organization that provides employment opportunities for people with disabilities. He also serves as a member of the MIT Educational Council.

As shared from Northrop Grumman

Posted by MIT Black History at 4:32 AM