An Esteemed Election to the Prestigious National Academy of Medicine 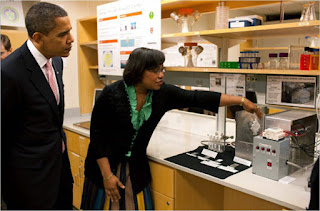 Paula Hammond, the David H. Koch Professor in Engineering and head of MIT’s Department of Chemical Engineering, has been elected to the National Academy of Medicine (NAM) in recognition of her distinguished contributions to medicine and health.

Hammond is one of 70 new members and nine international members announced on October 17, 2016 at the annual meeting of the NAM. Membership in the NAM is considered one of the highest honors in the fields of health and medicine and recognizes individuals who have demonstrated outstanding professional achievements and commitment to service.

Barack Obama smiles at Paula Hammond every day. A framed photo of the president, standing next to the Massachusetts Institute of Technology scientist, hangs on the wall over her desk here at MIT. “That was from his 2009 visit,” she says with a grin. Hammond was one of only a few MIT faculty members selected to present their work to the president in what turned out to be like a grown-up version of a science fair. She presented work on virus-based batteries. “We had to explain our science in 5 minutes,” she says. “But then Obama asked so many questions that we went way over time.”

Like Obama, Hammond is an emblem of change. Her chemical engineering research has evolved rapidly over the 15 years since she got started, riding some of that field's big trends. It started with a fairly fundamental study of polymers, the long chains that certain organic molecules form. First it was their mechanochromic properties—how their colors shift in response to physical stress—then their thermochromic properties, and finally their electrochromic properties. “I find color fascinating,” Hammond says.

Dr. Hammond's laboratory basic research has since yielded a torrent of industrial applications, from medical diagnostic devices to flexible electronics—more than enough to keep most scientists busy. Starting in 2001, she added a sideline on military applications, helping found the Institute for Soldier Nanotechnologies at MIT, focusing on technology that protects soldiers from harm and heals their wounds. For example, her lab developed a material that can be sprayed onto wounds to accelerate blood clotting.

Hammond’s many awards and honors include the Alpha Chi Sigma Award for Chemical Engineering Research in 2014, the American Institute of Chemical Engineers Charles M. A. Stine Award in Materials Engineering and Science in 2013, the Ovarian Cancer Research Program Teal Innovator Award in 2013, the Junior Bose Faculty Award for Excellence in Teaching in 2000, an National Science Foundation Career Award in 1997, and the MIT Karl Taylor Compton Prize in 1992 (in recognition of achievements in citizenship and devotion to the welfare of MIT).

Posted by MIT Black History at 3:28 AM