A Pioneering Student in the 20th Century 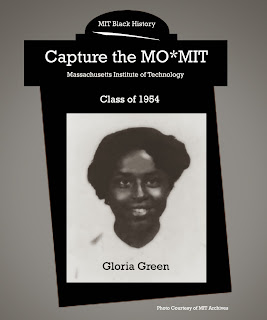 Graduating from Washington, DC's prestigious Dunbar High School in 1949, Gloria Green was on the path to take an unprecedented challenge.  Gloria became the second black woman to attend MIT since1905 when Marie Turner enrolled, Course IV (Architecture). Gloria's academic aspiration was also in pursuit of becoming a professional architect. After the first semester, plans for an alternative academic route became a reality. She attended a junior college, reapplied to MIT and then attended for one year. Her pioneering spirit at MIT within the class of 1954 was remarkable. The class produced a future MIT President and Chairman of the Corporation, Dr. Paul E. Gray. Dr. Gray and Gloria Green freshmen class yearbook pictures were posted side by side alphabetically. It was a special time for Gloria during that initial year in 1949, and also a historic moment as well for MIT. Gloria later married, raised a family and completed an undergraduate degree in Mechanical Engineering from the University of the District of Columbia (UDC).

Posted by MIT Black History at 3:31 AM