The 38th stamp in the United States Postal Service "Black Heritage" series honors architect and educator Robert Robinson Taylor of the Class of 1892. 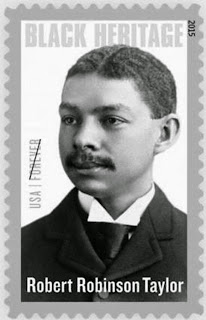 
The U.S. Postal Service honored one of MIT’s own today, issuing a stamp to honor architect and educator Robert Robinson Taylor. A member of the Class of 1892, Taylor was MIT’s first African-American graduate, and is believed to be the country’s first academically trained black architect.

Among other accomplishments, Taylor supervised the design and construction of the Tuskegee Institute in Alabama — now Tuskegee University — while also overseeing the school’s programs in industrial education and the building trades.

“As we honor the legacy of Robert Taylor, today’s ceremony reminds us that he was a builder … not only of structures, but of communities … and an architect who designed not only a campus of national importance … but a more promising future for generations to come,” Reif said. “Robert Robinson Taylor truly represents the best of MIT.”

More about Robert Robinson Taylor and this Commemoration.