MIT-Haiti Initiative: Technology and Pedagogy in the 21st Century 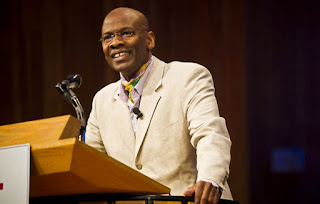 Promoting active learning and Kreyòl language in science, technology, engineering and math (STEM) disciplines, to help Haitians learn in the language most of them speak at home.

A project for the development, evaluation and dissemination of active-learning resources in Kreyòl to help improve Science, Technology, Engineering and Math (STEM) education plus leadership and management in Haiti.

Dr. Michel DeGraff is a professor of Linguistics at MIT, and the Principal Investigator of the MIT-Haiti Initiative. He is a leading expert in enabling science and engineering pedagogy within educational systems throughout Haiti and concentrated Kreyòl speaking population settings around the world. His collaborations with Google and other research sponsored entities are educational breakthrough achievements in allowing young people to learn STEM related technologies taught in the classrooms where their native language Kreyòl is the primary language of learning.

Professor DeGraff is the Director of MIT-Haiti Initiative, Founding Member of Akademi Kreyòl Ayisyen. His research interests are in Syntax, Morphology, and Language Change.

In recent years, MIT scholars have helped develop a whole lexicon of science and math terms for use in Haiti’s Kreyòl language. Now a collaboration with Google is making those terms readily available to anyone — an important step in the expansion of Haitian Kreyòl for education purposes.

The new project, centered around the MIT-Haiti Initiative, has been launched as part of an enhancement to the Google Translate program. Now anyone using Google Translate can find an extensive set of Kreyòl terms, including recent coinages, in the science, technology, engineering, and math (STEM) disciplines.

“In the past five or six years, we’ve witnessed quite a paradigm shift in the way people in Haiti talk about and use Kreyòl,” says Michel DeGraff, a professor of linguistics at MIT and director of the MIT-Haiti Initiative. “Having Google Translate on board is going to be another source of intellectual, cultural, economic, and political capital for Kreyòl,” he notes, adding that the project will aid “anyone in the world now, if someone is interested in producing text in Kreyòl from any language.”

In Haiti, 95 percent of the population is fluent in Kreyòl only; at most 5% of the Haitian population speaks French fluently. “In Haiti’s classrooms,” said Guerda Jean-Guillaume, professor at the Training Center for Fundamental Schools in Haiti, “most children do not like to ask or answer questions. They are constantly struggling to translate from Kreyòl into French or from French into Kreyòl.”

French is the primary language of instruction in Haiti’s classrooms. School exams as well as national assessment tests are mostly conducted in French, rather than Kreyòl, and STEM course materials for high schools and universities have been available almost exclusively in French — until recently when the work of pro-Kreyòl educators both in Haiti and abroad, including work by the MIT-Haiti Initiative, started showing the key benefits of a Kreyòl-based education at all levels of the education system.

This Initiative meets a crucial need in Haiti. It introduces modern techniques and tools for interactive pedagogy in STEM while contributing to the development, by Haitians and for Haitians, of digital resources and curricula in Kreyòl.

“The basic premise of our initiative,” DeGraff explains, “is that using Kreyòl for Haitian education is an essential ingredient to improving quality and access for education for all.”

“A Haitian Creole program for preschoolers arrives in Mattapan”
In Boston Globe, September 7, 2017

“How Discrimination Nearly Stalled a Dual-Language Program in Boston.”
In The Atlantic Monthly, April 7, 2017.